Citizen-Protectors: The Everyday Politics of Guns in an Age of Decline is now available from Oxford University Press. 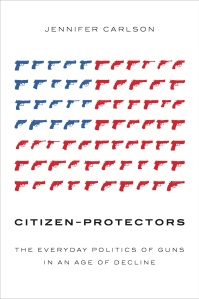 Using participant observation and in-depth interviews, Citizen-Protectors: The Everyday Politics of Guns in an Age of Decline examines the increasing popularity of guns as self-defense tools among Americans, especially but not exclusively among white conservative men, since the 1960s. Millions of Americans now hold licenses to carry guns concealed – more than at any previous point in history.  This book analyzes how gun politics are not just products of particular social contexts but that guns, and the practices associated with them, reshape social life.

“… a timely, well-written, jargon-free, nuanced book on why millions of Americans carry guns and view themselves as models of good citizenship… Gun supporters and gun opponents will be challenged by this sophisticated work.” – CHOICE

“In this insightful, often eye-popping study, Jennifer Carlson describes how millions of Americans have come to view carrying of concealed guns in public as a civic obligation – and to regard killing in self-defense as a moral act. Whether you embrace these views or find them repugnant, the study will force you to grapple with uncomfortable questions about the role of the state vs. the individual in maintaining public order.”— Kristin A. Goss, Duke University, and co-author, The Gun Debate: What Everyone Needs to Know

“Moving beyond arguments that reduce gun culture to conservative politics, Jennifer Carlson reveals something much more complex and consequential is at stake in gun politics: a story of American decline, gendered displacement, and disorder. Through a captivating ethnographic account , Carlson traces the emergence of the ‘citizen-protector’ based on the perceived right to defend oneself and others. Citizen-Protectors is a rare achievement: it combines insightful analysis and critique with a sensitivity to men’s lived experiences of displacement—and to their corresponding reassertions of dignity.”—Lynne Haney, New York University

“Carlson’s study is the first to take gun carriers seriously as social subjects, a breakthrough in our national discussion of guns, law, and society.”—Jonathan Simon, University of California, Berkeley

“In this reflexive and riveting ethnography, Jennifer Carlson locks, loads, and fires a nuanced argument about how guns help to address problems of social, economic, and physical insecurities in the United States. The findings compel the reader to reflect on the ubiquitous and embodied American culture of self-reliance, racialized criminalization, and vigilantism.” —Victor Rios, University of California, Santa Barbara